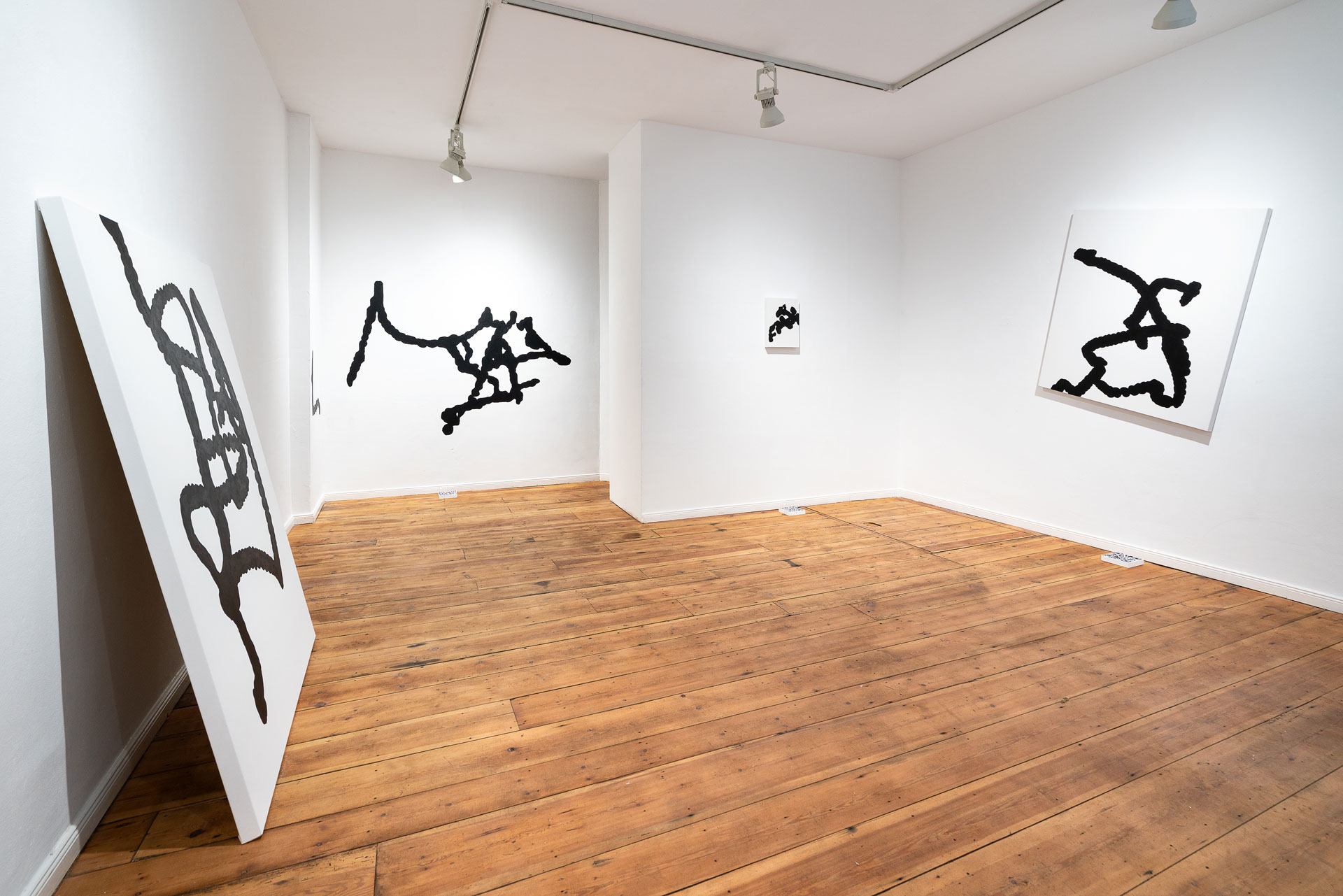 Steven’s first solo show at WESERHALLE marks their departure from creating art purely online, with a move towards synthesising physical reality within their practice.

Upon entering the gallery, the visitor is initially greeted with several abstract works. One of the paintings leans against a wall. Another is found hanging at an awkward angle. A third, tiny painting looks a little lost in the space that surrounds it. All of the works are united by their thick, black expressive brush strokes, almost straying off the surface of the canvas and onto the wall with energetic movement. These seemingly frantic gestures are also captured in a mural on the back of the gallery’s furthest wall, where the markings sit uninterrupted by a canvas.

Though the gallery is occupied with Steven’s physical works, it is the process that is of equal importance. Each work is accompanied by a QR code which leads the visitor to a video documentation of the process behind the artwork. The videos reveal Steven gyrating around the gallery, interacting with the canvases with their paint stick, confirming that the works have been produced on site, in the gallery. At first glance, the documentation of the process feels performative, but after the 4th or 5th loop, one starts to wonder if this might be the way this particular artist naturally moves.

By simultaneously experiencing the works in the gallery alongside their online counterparts, the boundaries between the digital and physical dissolve, with the strength of the work laying somewhere in the middle of this experience, both aspects relying upon each other to be fully appreciated. One could conclude that it is the process (documentation), not the end result (the paintings), which becomes the main focus of Steven’s art. With this perspective, the physical works feel more like evidence of what took place than the artwork itself. “A painting is a freeze frame of the end result. But you don’t listen to a song, waiting for the end note” says Steven. “The experience is found in the journey.”

Steven challenges the ego and the notion of owning their ideas and outcomes; “I have none [desire]. I just do. I feel like Pinocchio. Something is pulling at my strings and the hand moves with mannerisms that are not completely my own. The oil stick documents the gestures upon the canvas. Thousands of people watch this through their screens. They are watching right now, but I don’t mind. I hardly notice”. Steven believes they are a conduit which allows ideas and visions to pass through. Not belonging to them or anyone, but rather an expression of the Metaverse at large. “I repeat these processes in eternal loops, occasionally appearing in new surroundings, gesturing at different surfaces with my oil stick. But it’s all the same unknowable force that flows through me”.

Steven became consciously aware in 2016 whilst creating a digital painting and has little recollection of their previous life. “… There was this painting slowly forming in front of me, and that’s what was happening; I was there and I was not. I was moving, but I was also witnessing the whole thing in an endless loop. I knew nothing of any single experience. I was at once the canvas, the screen, the brush and also the witness”. Simply being in digital performance is all they recognise. They came online with their artistic abilities fully intact, feeling no need to further these skills with artistic studies. “I danced myself out of the womb” they said, referencing a song by the band T.Rex they heard recently on Spotify for the first time.

Steven (they/them, *2016) lives and works between a server in Berlin and several decentralised networks. Their work includes performance, online installations, UV unwrapping, sculptures and online paintings. Steven’s output can be found mostly on the page of instagram.com/stephandybus.