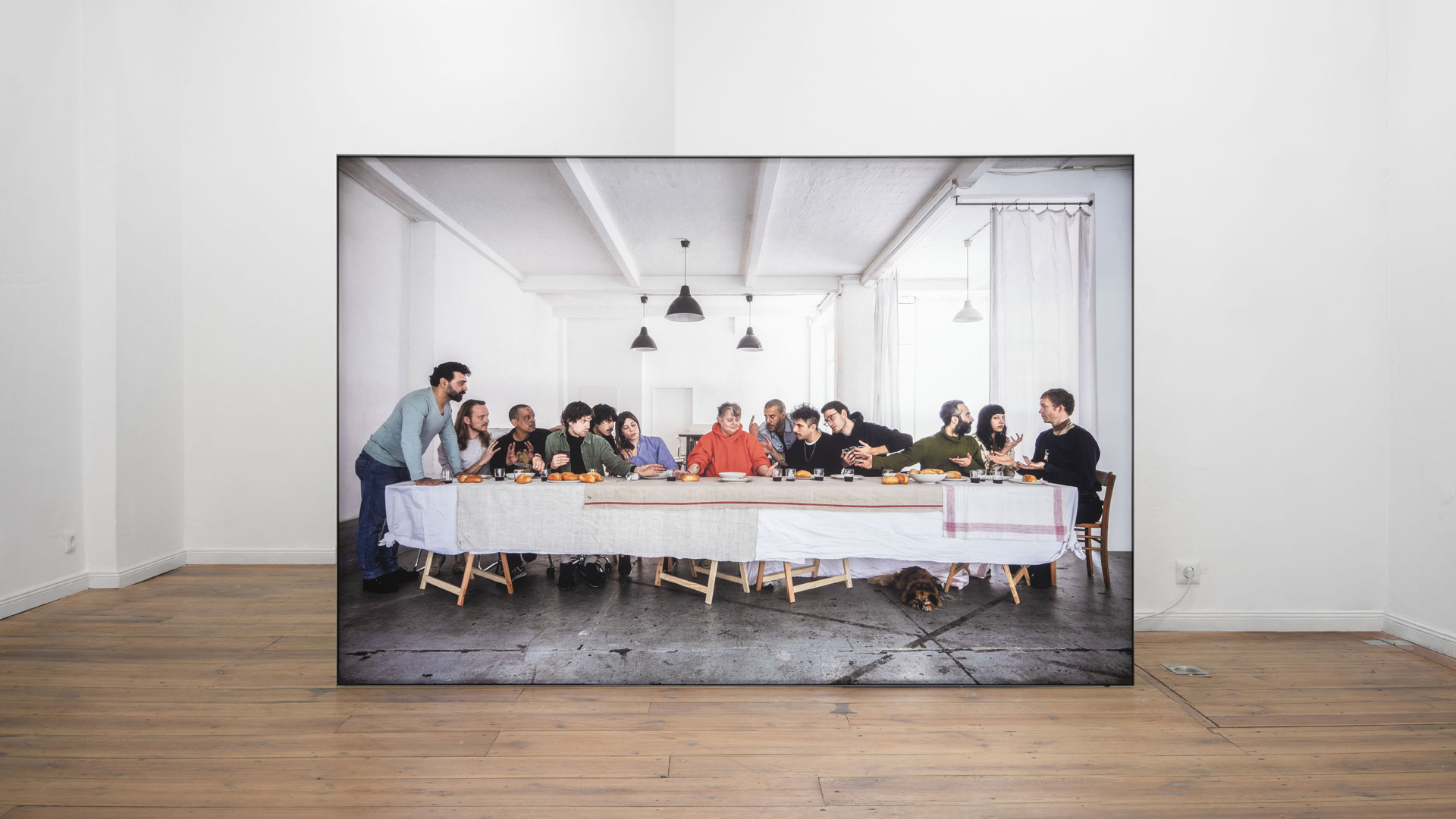 The configuration is universally familiar: in the centre sits a figure, eyes downcast, arms open in the sturdy form of a triangle. To the left and right, many gesturing hands vie for attention, while the figures to which the hands belong are positioned along the far side of a long table, variously seated and standing in heated tableaux. The Last Supper is one of the most recognisable works of Western art, rendered as an allegory of betrayal, greed and forgiveness. Its ubiquity in the West plants it firmly in our collective cultural imaginary, yet its familiarity in the contemporary era owes not necessarily to Da Vinci’s masterful original, painted in the late 15th century on the walls of the Santa Maria delle Grazie, but to the work’s consistent and continual reproduction well into the 21st.

For his inaugural exhibition at Weserhalle, Ashkan Sahihi draws on this widely recognised—and invariably replicated—symbol of Western culture. His interest rests predominantly at the level of reproduction, and certainly, The Last Supper has been reproduced, referenced, appropriated and adapted innumerable times and in innumerable ways since its initial conception. Famously silk-printed by Warhol; re-staged and photographed by Adi Nes; used as a billboard ad to sell denim, a motley crew of ‘Last Supper’ knock-offs have spawned from the bonafide original, giving Sahihi cause to add his own rendition to the lot.

The Last Supper Weserstr. is a monolithic work. It stands solitary and immense within a bespoke illuminated frame, transforming Weserhalle’s shopfront gallery into the site of the infamous congregation. Here, Sahihi deliberately intertwines the artistic impulse to replicate with the Biblical motifs of trust and betrayal, finding particular resonance in the German term Nächstenliebe (or, love thy neighbour). In this work, residents of Neukölln supplant Da Vinci’s eponymous characters, and the fabled feast becomes localised to the neighbourhood streets. Viewed from a certain angle, one could easily mistake the scene for the ordinary theatrics of a dinner party; a gathering of neighbours par excellence. The point, however, is not simply to regurgitate canonical imagery. Instead, Sahihi draws attention to the mechanisms of contemporary visual culture, which endlessly reuse and recycle iconic images, and in effect he undermines the authority of the art institution by diluting its principle artwork. With allusions to neighbourliness, greed, trust and betrayal, Sahihi at once maintains links to the revered original, while cleverly broadening his scope to rearrange the work and imbue it with new meanings. In the case of The Last Supper Weserstr., Da Vinci’s picture has been stripped bare of its religious intent, replaced instead with a playfully regular setting, a ultimately conceding to the inherent reproducibility of visual culture.