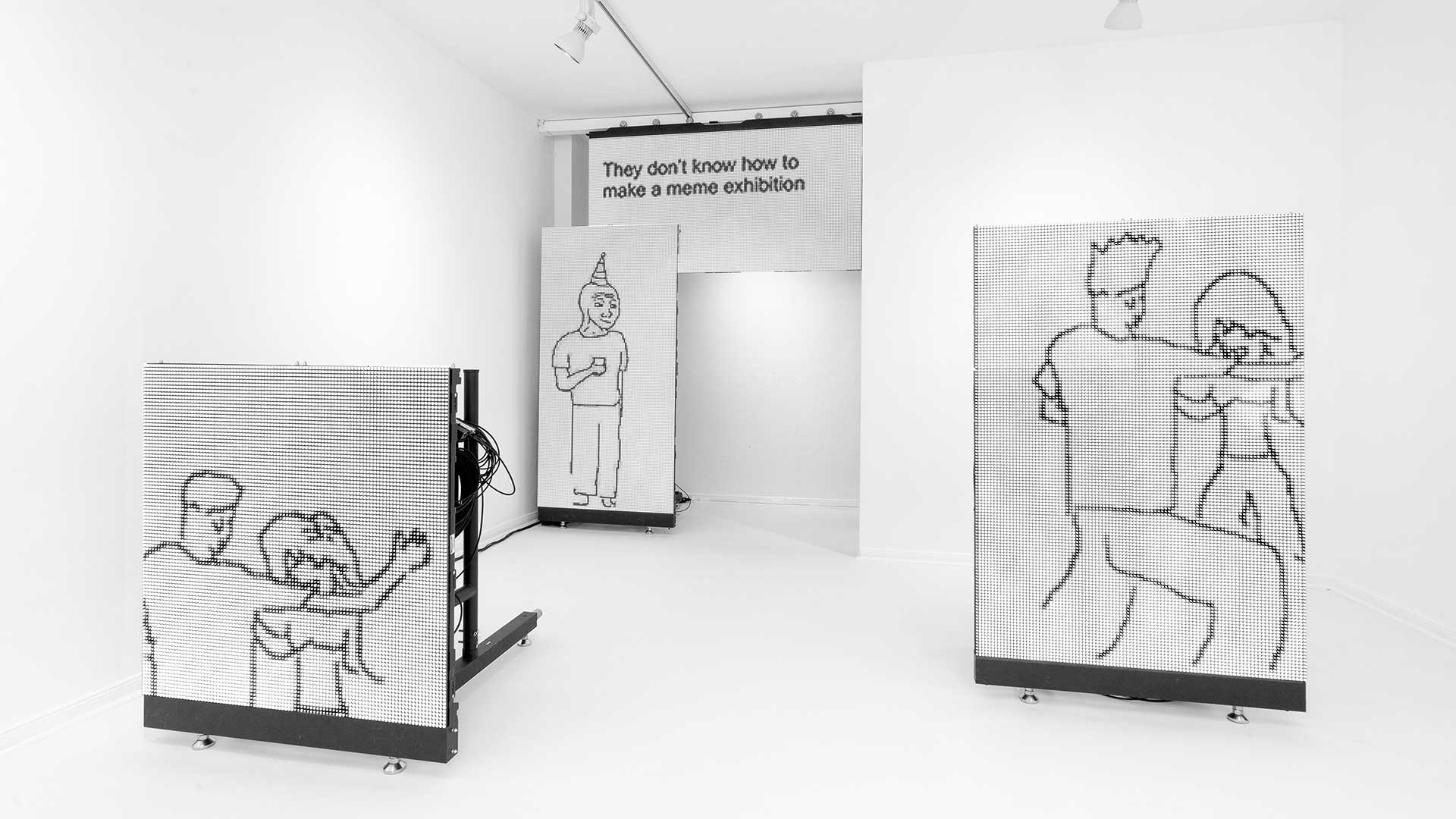 WESERHALLE is pleased to present The Party, a solo exhibition by Cem A., the person behind the Instagram art meme page @freeze_magazine. His memes explore topics such as survival and alienation in the art world, often through a hyper-reflexive and self-deprecating lens. This practice naturally extends into the exhibition The Party. Wojak, the ever-morphing face of digital folklore, takes centre stage in the installation. He lingers in the corner of the gallery, despondent that they, the party-goers, don’t know “what it takes to be an artist”.

The composition of The Party follows a popular internet meme known as They Don’t Know, depicting a party where the narrator, Wojak, soothes his social anxiety by thinking about how the strangers around him don’t know how cool he secretly is. Wojak, sometimes referred to as “That Feel” Guy, is a familiar face for those who are acquainted with meme culture. He frequently appears on the internet as a relatable character depicting feelings of boredom, melancholy, regret or loneliness, and his origins are as murky as the roots of internet meme culture itself.

In this exhibition, Cem A. utilises Wojak as a mediator between himself and the audience, making sense of his own gradual disillusionment with the art world and his subsequent, and admittedly ironic, success as a meme maker. The concept of a meme exhibition would fit in perfectly as a meme itself on @freeze_magazine, especially among his memes which take on issues surrounding the white cube, elitism, Western-centrism, cultural capital and clout. The Party is not only concerned with the practicalities of presenting memes offline, but also explores the politics of doing so. The display seeks to preserve the digital essence of internet memes while offering an alternative physical experience to the audience.

Cem A. is an artist and curator known for running the art meme page @freeze_magazine. Since its inception in 2019, the page has become a tool for creative collaborations between Cem and fellow artists, researchers and collectives. It has been featured in The New York Times, The Art Newspaper and Monopol Magazin.

Text by İdil Galip. İdil is a doctoral researcher in sociology at the University of Edinburgh, studying the relationship between memes, digital culture and labour. She is the founder of the Meme Studies Research Network.