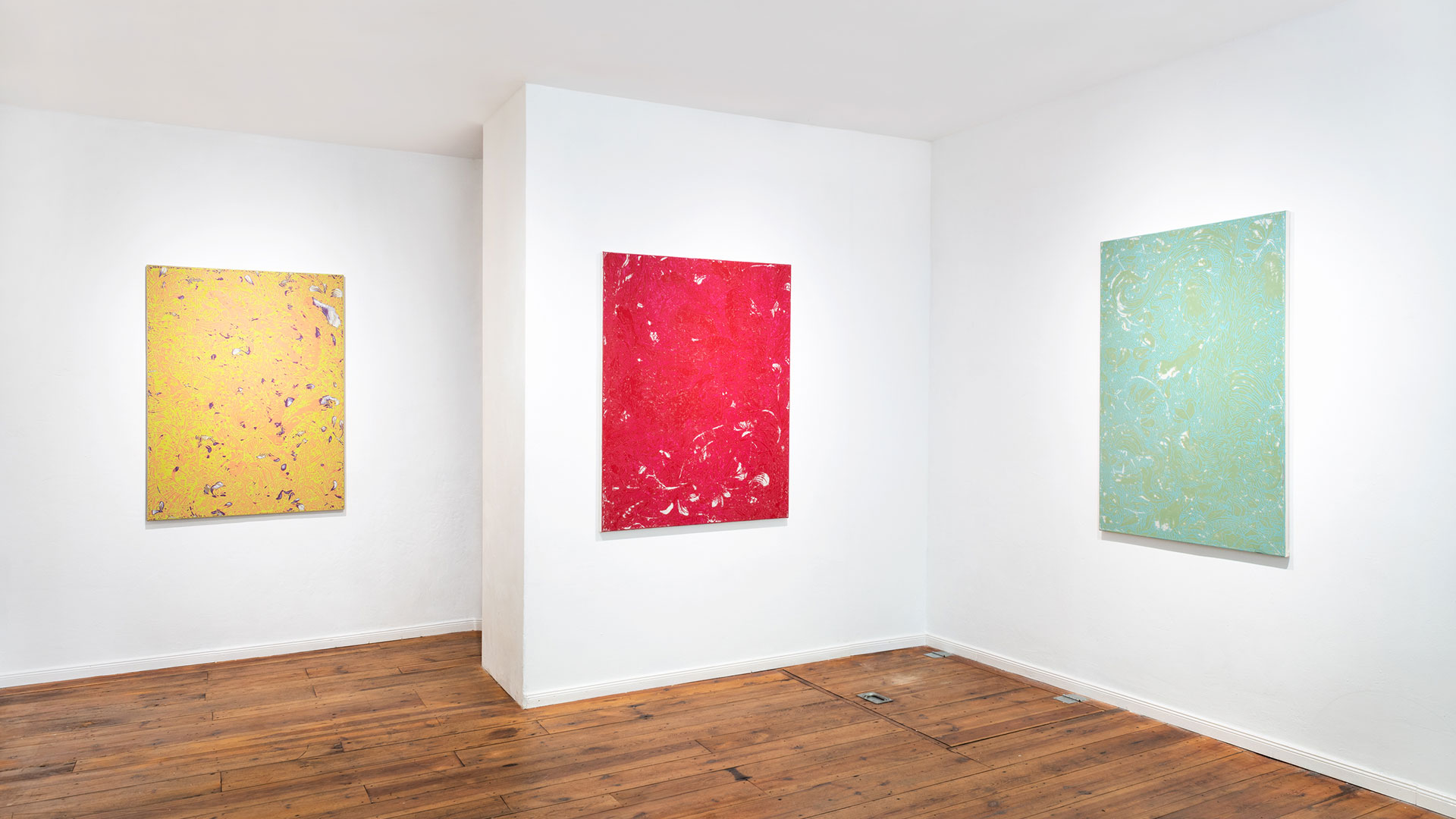 Weserhalle is pleased to present One In The Bush, a solo exhibition by the Berlin based artist Sascha Brylla.

While Brylla’s work may appear abstract at a distance, a closer look reveals an entirely new –– and at the same time very familiar –– story. Each of the works show a male dog trapped in what appears to be an untameable ocean of plants, conquered by nature. An image reminiscent of fairy tales such as Sleeping Beauty where knight upon knight falls victim to the impenetrable bush surrounding the sleeping princess, but more so falling victim to their own hubris. In Brylla’s work, the dog is at times passive, paws in the air in defeat. Other times, he strains against the greenery, eyes bulging, sharp teeth bared. The strength of these dogs is emphasised through the characteristic style which brings to mind Japanese woodblock prints, depicting dragons and spirits; which at times make them appear even threatening, mythical and otherworldly.. Yet their masculinity is overpowered by nature itself, a symbol often associated with femininity and which functions as a fundamental aspect of Brylla’s work.

The works featured in this installation are part of Brylla’s most recent series, which sets a focus on challenging the idea of idealised masculinity. Up close the spectator witnesses how strong male figures are being tamed at the hand of flowers and leaves. From afar the deadly struggle morphs into an overall composition – evocative of William Morris’s 1860s wallpapers compositions – which impresses with its intricacy and vibrant colours and exudes an almost meditative calmness. These two visual levels intertwine and charge each other, and in combination with the exhibition’s title, invite a larger discourse on how stereotypically masculine attributes, such as machismo, often seen as the starting point of violence and self-destruction, also have implications for sexuality and consent.

In order to create his works, Brylla employs a technique typically associated with plaster wall façades or ceramics known as sgraffito. In this process, a knife is used to carve lines into paint, creating a spidery web of uncovered layers. Because of this unusual process, Brylla refers to his technique as “on the edge of painting”; more a sculptural “process of removal” than traditional painting, which layers paint to bring an image from abstraction into clarity. Brylla’s technique requires both play and precision: the “scratching” required to bring each piece to life can be unforgiving. As Brylla says; “Sometimes it’s gone, and there’s nothing I can do.”

Sascha Brylla (*1987, Crailsheim) is a German artist living in Berlin. He received degrees in painting at the Berlin-Weißensee School of Art and the Royal Danish Academy of Fine Arts, Copenhagen. In addition to this show at Weserhalle, Brylla’s work has been exhibited around Europe, most recently at the Plus-One Gallery and Gallery Sofie Van De Velde in Antwerp, Ruttkowski;68 in Paris, and the NBB Gallery in Berlin.