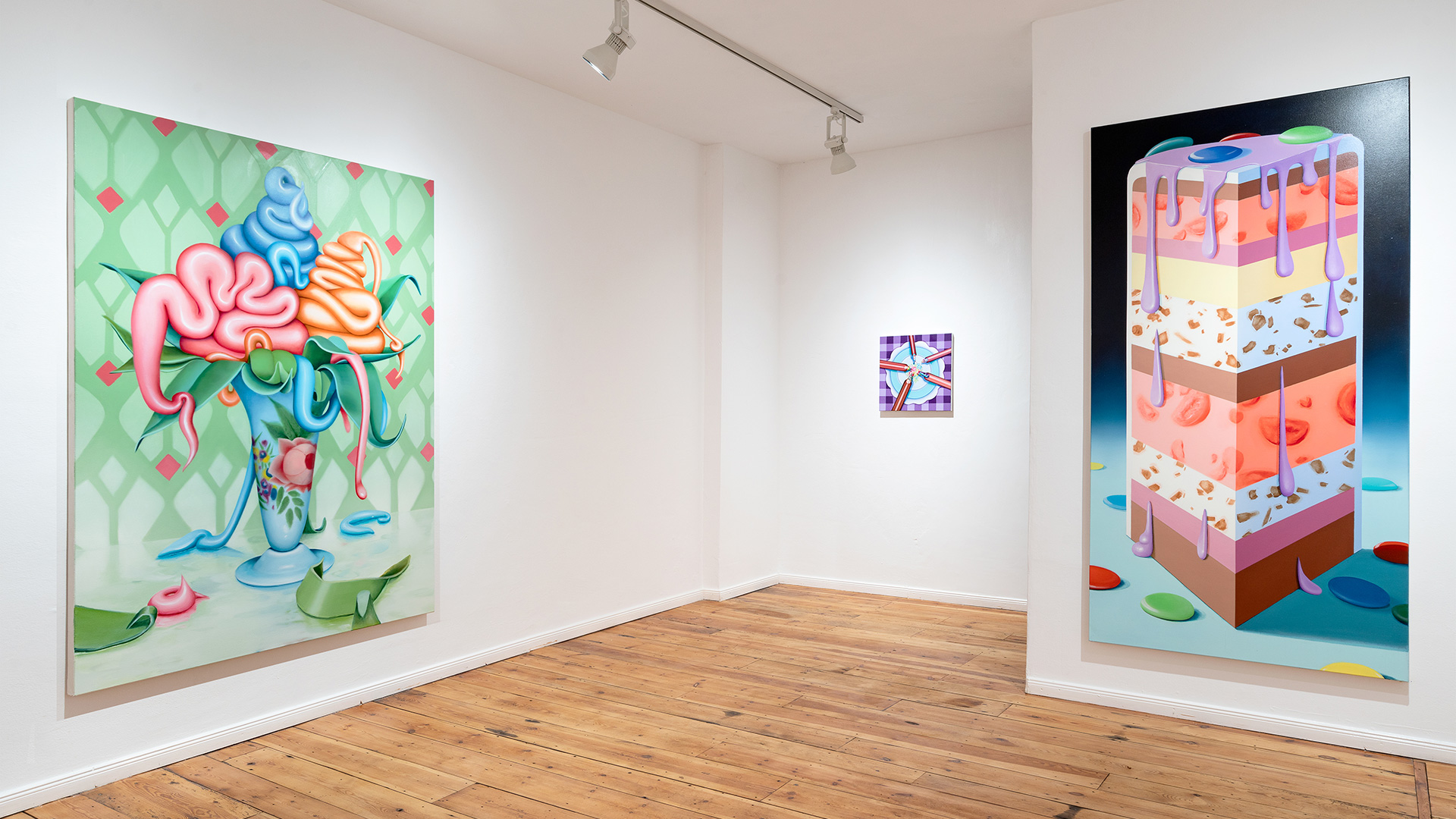 Welcome to the uncanny image world of Mona Broschár. Inhabited by sausages, bows, cupcakes, ice cream, floral dishes, and fake finger claw nails; the motto is, “Don’t take life so seriously—Let’s play!” Fun times abound here, and fetishes are lived out, while the boundaries of “good taste” are pushed to its limits.

Instead, her world is populated by playful tensions, oscillating between the beautiful and the grotesque—sometimes pure and innocent, at others unashamedly lascivious. Here, deliciousness can quickly turn repugnant and sweetness leaves a pleasurably bitter aftertaste.

Mona Broschár paints objects and food devotedly. A sausage appears adorned with a bowtie. A larger-than-life slice of cake is decadently coated in icing. Can we still call this food?  Or are these objects creatures instead? Broschár portrays these objects as if they were autonomous beings. The question of who tied the bow or baked the cake—and for whom—remains unanswered. In this uncanny world, the bowtie-clad sausage and the imposing cake slice—named “Endgegner“ or boss in English—are personified. It’s as if they dressed up themselves for the occasion.

When confronted with this pictorial world, something that the author Clemens Setz calls ‘brain tingling’ sets in. One might get goosebumps, feel a pleasant tension that travels through the body, heightened awareness, and pleasure; these “brain tingles” are typical ASMR effects (Autonomous Sensory Meridian Response), reactions to certain acoustic, visual, or tactile sensory stimuli. Broschár’s smooth hyperrealist paintings elicit such reflexes. One feels the urge to take hold of these succulent objects—an ice cream, an adorned sausage, or a moist slice of cake—in order to ingest them or merely possess them. In her painting “Food Porn”, the adorned sausage invites one to appropriately misappropriate it—living up to its name. In “Endgegner” in turn, the desire to lick or scrape off the icing might arise. There is a sense of movement to these objects; one can almost see them wobble and bounce around. Not only that, one can hear them, too, gurgling and squeaking and bouncing about; a synaesthetic feast!

‘Bounce’ implies a push and pull movement; attraction and repulsion. This can also be said of Mona Broschár’s works. Although undeniably magnetic and possessing an immersive quality, the paintings ultimately let the viewer bounce off them. The sense of intimacy which emerges during the first encounter with these works dissipates. They turn out to be inaccessible, for one may imagine everything but touch nothing. In this way, she brings to life everyday digital experiences which are similarly fun and entertaining yet also punctured by frustration.